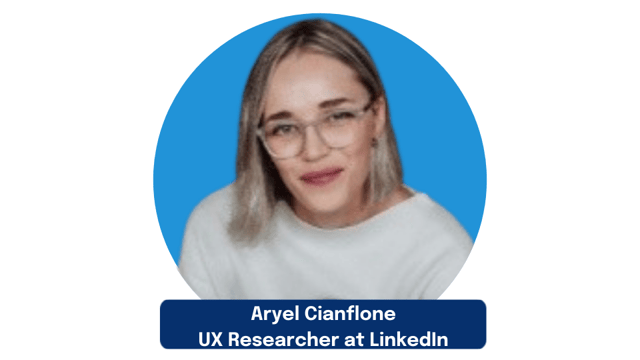 Aryel Cianflone, UX Researcher at LinkedIn, discusses the most effective research techniques and how she creates presentations that align and inspire her team.

Managing a product that solves a problem that you’ve personally experienced can be motivating and inspiring. However, it’s easy to forget that our own experiences are not always the same as everyone else’s experiences.

UX research enables you to step outside of your assumptions and gain the important perspectives of your users.

In short, Aryel says "when it comes to building better products, UX research is a way to clarify our perspective and check our assumptions. And also it's an amazing tool to inspire your team to come up with new innovations." She describes the UX research process as follows:

We put together a plan, we conduct the research, hopefully we're synthesizing as we go, and then we'll come out the other end with the whole team aligned on how best to move forward with this particular product.

Be really, really clear in the questions you're trying to answer. Be very, very careful about who you recruit for your study. Make sure not to ask leading questions.

Aryel stresses that PMs should take ownership of research efforts:

Aryel also shares how she presents her research to key stakeholders. She generally begins a presentation with high level insights, and then shares specific observations, her confidence level in the data, and the implications for product development. However, Aryel stresses the importance of be cognizant of your audience’s desired level of involvement in the research process and making the information as accessible as possible.

I would say that when I'm working with the team, I do everything that I can to include the team. Make them feel like they're an important part of the process, because they really are. Research is only as good as the way that it's used. So, if you do the best research but no one uses it, no one understands it, then it's kind of like the tree falling in the forest.

You’ll learn a lot from this episode about user research, collaboration, and delivering presentations.

Joe Lalley, Experience Design Leader at PwC, shares how to use design to create innovative...

Jack Cole, Director of Design at Motivate Design, talks about how to source people for user...