The Messy Middle is Product Management 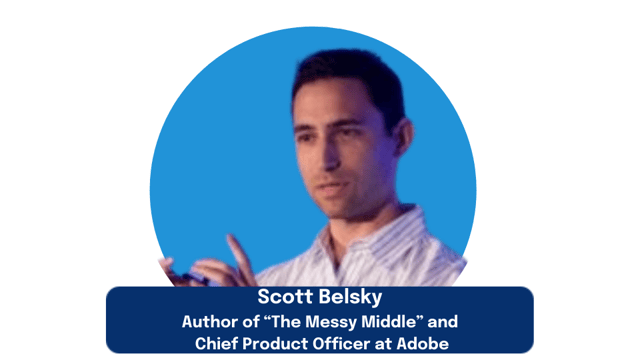 Scott Belsky, Author of “The Messy Middle” and Chief Product Officer at Adobe, discusses the arch of a company’s lifecycle and how leaders can successfully guide their teams through the peaks and valleys.

Scott Belsky co-founded Behance, which was acquired by Adobe in 2010 for $150 million. He then became Chief Product Officer at Adobe, where he’s focused on modernizing legacy products such as Photoshop. Scott has also been an early-stage investor and active advisor to companies including Uber, Warby Parker, Pinterest, Periscope and Sweetgreen. Through these experience, he’s gained an acute understanding of how companies evolve and how to lead teams through the inevitable ups and downs.

When people first begin a startup or a small innovation team within a big company, there’s a great deal of excitement. People often focus on the origin stories of Steve Jobs or Jeff Bezos working from their garages and celebrate the end result, but in doing so, they often gloss over the what Scott calls “messy middle,” a volatile period of ups and downs where organizations realize that they don’t know what they are doing. Strategies that used to work stop working, and dreams of becoming the next Steve Jobs start to get cloudy.

Because humans are all born with hard wired short term reward systems, Scott says that long term goals are simply not enough to keep teams engaged. Leaders have to synthetically create short term rewards to help their teams endure the valleys of the messy middle. These smaller-scale metrics create the throughline achieving a vision.

Scott stresses the importance of making the team feel like they’re making progress by sharing an example: if you’re taking a 10-day road trip with blacked-out rear windows, the people in the back will go crazy unless you narrate what milestones you are reaching along the way. At Behance, this meant working to get the Google search algorithm to stop suggesting “enhance” instead of “behance.” This wasn’t the only thing that the company needed to accomplish in order to be successful, but it was one important step along the way.

Scott argues that innovating in a big company is not all that different from building a startup. Making a change in a big company requires essentially building a new team, which will face the same doubts, resource constraints, and difficulty in keeping the team engaged.

Scott therefore stresses the importance of building the right culture. There needs to be a shared belief that the team welcomes risk taking such that team members feel psychologically safe.

You’ll learn a lot in this episode about leadership, entrepreneurship, and overcoming challenges.

Alex Gruber, Senior Director of Product at Vonage, shares how he infuses a startup-minded culture...