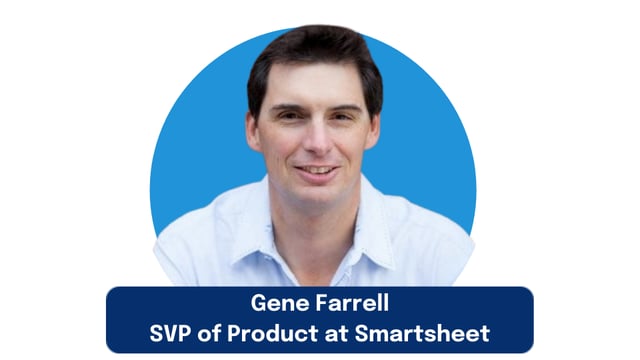 Gene has led enterprise product teams at some of the world’s leading companies - including Coca-Cola, Amazon, and now, Smartsheet.

At Coca-Cola, he launched a new B2B2C hardware product called Freestyle that grew to become one of the company’s most successful research and development projects. After this experience, Gene was inspired to continue innovating. However, he found that breakthrough innovation was hard to come by at a company as large as Coca-Cola. So he joined Amazon, a company that is widely regarded as being one of the most innovative companies in the world.

At Amazon, Gene led multiple Amazon Web Services teams including Amazon WorkSpaces, a new cloud desktop service that we built from the ground up, Amazon Chime, a new unified communication service that removes the frustration from meetings, Amazon WorkDocs, an innovative collaboration and file storage service, Amazon WorkMail, a business email service, and EC2 Windows, a fast-growing business that provides a platform for customers to host Microsoft workloads on Amazon's Elastic Compute Cloud.

After over five years at Amazon, he joined Smartsheet, a cloud-based work management platform, as Senior Vice President of Product.

Gene has helped scale the product management function, take the company public, and incorporate artificial intelligence. He says that when managing enterprise products it’s critical to make the business user the top priority but also help the end-user be successful.

Gene emphasizes the importance of finding the balance between what customers say they want and actually solving their problems. He recommends striving to understand what the customer is trying to accomplish rather than taking feedback at face value.

You’ll learn a lot from this episode about enterprise product strategy and leadership.

Sam Nordstrom, Product Manager at Intuit, shares how Intuit transformed into a more...

David Cancel, CEO of Drift and formerly Chief Product Officer at Hubspot, shares how to build...