Operating in Day One is Product Management 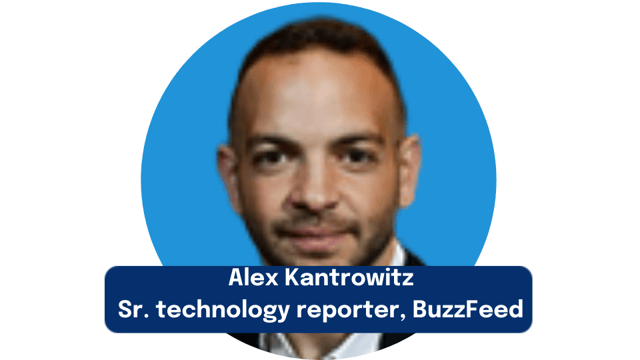 Alex Kantrowitz, senior technology reporter at BuzzFeed and author of Always Day One, shares how companies can innovate and invent like a startup and compete with successful tech giants like Amazon, Facebook, Google, Apple, and Microsoft.

For nearly five years, Alex has covered technology for BuzzFeed News. Recently, he wrote a book on the inner workings of Amazon, Facebook, Google, Apple, and Microsoft, and how those organizations are operating in ‘Day One,’ a term that Amazon founder and CEO Jeff Bezos coined to encourage employees to always operate like it’s the first day of a startup.

Though Alex regularly reports on these companies in his day-to-day work as a tech journalist, he was inspired to write a book after a meeting with Facebook CEO Mark Zuckerberg.

“I walked into a meeting in his office with my bureau chief. The first thing he did was ask us for feedback. I found that pretty interesting. Then I found out that feedback is baked into Facebook in a very fundamental way. Requests for feedback at Facebook were less geared toward putting people in their place and more geared to making sure that ideas can spread all across the company,” explains Alex. “Once I had that nailed down, I started looking at the other tech giants, and slowly but surely realized that systems like this exist not only at Facebook, but at Amazon, Google, and Microsoft as well.”

After noticing these similarities between the major tech giants, Alex began to investigate and speak to people inside each organization.

Through hundreds of interviews with each company’s current employees, former employees, partners, insiders, and industry analysts, his book, Always Day One, reveals that these tech giants are so successful because they continually reinvent for the future, oftentimes at the expense of their legacy products or business lines.

“You can think that you’ll have a long time to milk your assets, but the truth is that the future comes faster than you can expect,” he says.

Furthermore, all of the tech companies Alex studied do two things really well. They minimize execution work to make room for idea work, and they build mechanisms to channel people’s ideas to ultimate decision makers -- something he refers to as ‘the engineer’s mindset.’

“With this time for idea work, if you're able to put some of these parts of the engineer's mindset into practice, you could be pretty good at bringing new ideas to life,” says Alex.

In this episode, you’ll learn about the Day One philosophy, innovation strategies, and building a feedback-friendly culture.

Lina Stern, Head of Employee Experience and Organizational Design at LearnVest, shares how to...