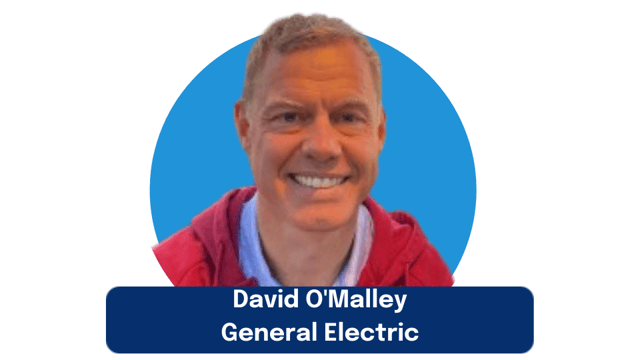 When asked about agile companies, few people would think of the world’s largest producer of aircraft engines. But as the 18th largest company in the world, General Electric (GE) has been transforming itself by adopting digital technology and modern product management best practices.

David O’Malley has helped lead this transformation across the company.

David says that getting started was the hardest part. This was because executives at GE, a very finance-driven organization, wanted evidence that this new approach would work within GE, which was of course impossible, because they hadn’t tried yet. Fortunately, David did find executives who were willing to take a chance on this new approach.

Even though there was buy-in at the executive level to adopt digital technologies, the main hurdle that was preventing them from doing so was that teams were simply not moving fast enough. David realized that he needed to cut down bureaucracy and empower teams to build great products. He did so by running accelerators that included coaching and a product management framework that put the user at the center of development.

David helped teams increase velocity by over 300%, but his goal was not simply to get more work done faster. He also helped teams work smarter.

During the accelerators, David limited teams to working eight hours per day. He says that product teams shouldn’t rely on “heroics” but should instead focus on sustainable practices in which people have ample opportunity to adapt to the challenges around them.

This video provides an inside look of an actual sprint at GE:

You’ll learn a lot from this episode about digital transformation and how to move faster in large organizations.

Tommi Forsström, VP of Product at Shutterstock, shares how he builds and motivates teams and...

Eric Ries, Author of The Lean Startup and The Startup Way, shares the management practices that can...