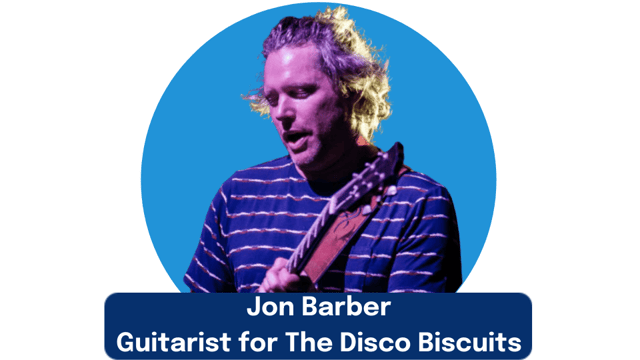 Jon Barber, Guitarist for The Disco Biscuits, shares how he uses experimentation and iteration to write music and how he applied similar strategies as a Chief Technology Officer.

If you attended 100 Disco Biscuit shows, each night and every performance would be different. While most bands spend most of their writing and recording albums in a studio before sharing it with their fans, the Disco Biscuits are different. The band primarily plays concerts where they create new music in front of the live audience.

“What we’re trying to do is go to different places as a band and write the songs on the fly,” says Jon Barber, the band’s guitarist.

Barber met his bandmates at the University of Pennsylvania and they quickly began performing at local bars. “We shipped the Disco Biscuits kind of early,” says Barber.

After 20 years of performing together, their sound, which combines classical, electronic, rock, and funk, has evolved and grown into a genre of its own. The band has performed in front of sold out crowds at some of the largest venues and music festivals around the country.

Experimentation and iteration has long been the ethos of the Disco Biscuits. They even play songs live before they finished writing them as a way to get feedback and improve. Often times, the band will go on stage with just a chord progression and then iterate on it, playing it in multiple keys or styles. Barber likens it to designing and testing prototypes and shipping early for feedback and iteration.

Because of the nature of their performances, Barber and his fellow bandmates are almost always on stage unaware and uncertain of what’s going to happen next. To them, even failed experiments lead to major breakthroughs.

“Sometimes you screw up a lyric here and there, or you hit a guitar line that's [off], or you're playing the song a little faster than you would, and as we fix all of those things, we're able to create more music out of that for some odd reason,” he says.

Having to create something new at every show and reinventing their sound is analogous to the innovation challenges that large organizations face today. Barber attributes much of their musical innovation success to teamwork, removing silos, and the entire band experimenting and iterating to create new music that people love.

The Disco Biscuits perform regularly, but years ago, the band took a break from constant touring. Barber learned to code and built several software products including Splice, a company that’s raised over $100 million in funding. He applied to product development and entrepreneurship many of the lessons and principles he learned improvising on stage and creating new music.

In this episode, you’ll learn a lot about experimentation, iteration, and how to apply innovation strategies in different industries and disciplines.

Maggie Jan, Data Scientist at Keen.io, tells us about the importance of looking at trends in...

David Cancel, CEO of Drift and formerly Chief Product Officer at Hubspot, shares how to build...