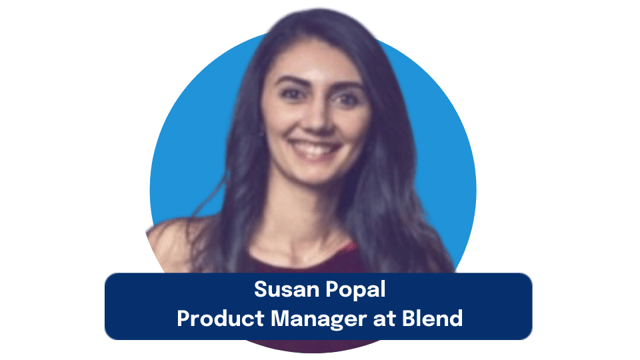 Susan Popal, Product Manager at Blend, shares how she and her team validated and launched a new product offering for mortgage lenders.

Susan Popal is a Product Manager at Blend, where she leads the team that developed an innovative digital product for mortgage lenders. Previously, mortgage lending was characterized by excessive paperwork and outdated processes that reflect the stringent regulatory landscape. Susan’s and her team were on a mission to modernize and revolutionize this antiquated experience.

Initially, the team talked to loan officers about what they wanted and launched a very basic set of features to see how users would react. However, they didn’t achieve much adoption. Susan realized that she needed to understand the entire loan officer workflow before she could assess where any new features would fit in.

She put the roll out on hold and went back to rethinking the problem. Susan started working with a dedicated pilot group of loan officers over the course of several months. She and her team first studied how the pilot group worked without software. This allowed her to understand the breadth of her customers’ workflow.

Her team had recurring video calls with the pilot users twice per week to get feedback and test ideas. In order to motivate loan officers to change their current behavior, Susan knew that she needed to deliver a significant innovation. Moving forward, she focused on developing a product that would solve for the entire workflow rather than just specific parts of it.

The team then brought new solutions to pilot users and to see if it helped them complete their workflow. Only after these new features were validated, did they build them out. Once pilot users were comfortable using the product on a consistent basis, Susan felt that the product was a real need for loan officers.

The mortgage industry is highly regulated and there’s a lot of nuance in the regulation workflow, so Susan included her company’s compliance team from the beginning of the development process. Susan says that every functional team at Blend can bring unique perspectives to the table.

Susan shares two high level insights that she’s gained from the development process so far. First, it’s not always enough to work on a feature-by-feature basis. Instead, you need to take a holistic approach and solve for an entire workflow. Change is hard, so users need a compelling reason to change their behavior. Second, Susan says that training new users on how to use the product was critical. Some users aren’t very tech savvy, so you need to help them get up to speed.

You’ll learn a lot from this episode about how to validate a new product offering and innovate in an old and regulated industry.

Jonathan Anderson is the co-founder and CEO of Candu.

Tiama Hanson-Drury is the chief product officer at Minna Technologies.