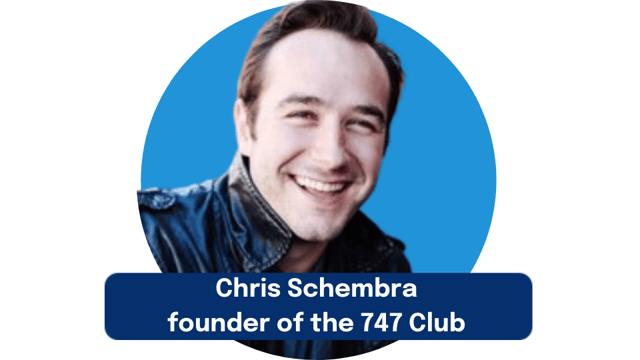 Chris Schembra, founder of the 747 Club, discusses how to build relationships and use gratitude and empathy to create lasting, human connections in a fragmented and disconnected digital world.

Chris asks that question at every single one of his company, 747 Club’s, dinners. He says that he asks that questions for a very specific reason: There’s power in having our voices be heard and sharing our stories.

Chris founded 747 Club four years ago as a way to help companies build relationships and create lasting, human connections in a disconnected digital world. Chris and his team do this by producing three-hour dinner parties that facilitate open conversation among attendees.

A natural storyteller, Chris has a background in theatre production. In July 2015, he returned to New York after producing a Broadway play in Italy. “I personally realized four things: I was lonely, unfulfilled, disconnected, and insecure. We started fiddling with food in our kitchen, and accidentally created a pasta sauce recipe and figured we should probably feed it to people to see if it's even good or not.”

He began to host dinner parties with a single intention: Creating a space for people to open up, be vulnerable, and connect. Initially, he welcomed founders, CEOs, and leaders to these dinner parties. Later, he tested the corporate waters and the impact was noticeable. “If less than three people cried, we considered that a failed night,” he says. But it wasn’t until the 2016 presidential election that it began to dawn on Chris just how much people were craving human connection.

Through an accidental pasta sauce recipe, fortuitous timing, and a love of connecting people, Chris realized he had tapped into a universal feeling of loneliness.

He stresses the importance of building relationships based on empathy, gratitude, and vulnerability. Regardless of whether you’re marketing to a business or a consumer, Chris notes, the human element is always at play. It’s for this reason that companies have flocked to these dinner experiences, hoping to learn how to build long lasting customer relationships.

Outside of dinners, Chris is passionate about teaching people how to cultivate empathy in the workplace, which directly ties to team collaboration and company performance. He cites two studies that illustrate his point, one that found 90% of HR leaders and CEOs think financial performance is directly tied to empathy, and the other that found employees who feel like their voice is being heard are 4.6% more likely to do their best work. Practicing empathy at work can be as simple as being a good listener and asking deep questions. As product managers, it means spending time with customers and listening to their needs.

In this episode, you’ll learn a lot about why it’s important to make human connections, how to build better relationships with clients and coworkers, how you can develop empathy in a professional setting.

Stefan Thomke, professor of business administration at Harvard Business School and author of...

Naira Musallam and Tim Lawton from Frontier7 discuss the role of statistical significance in...