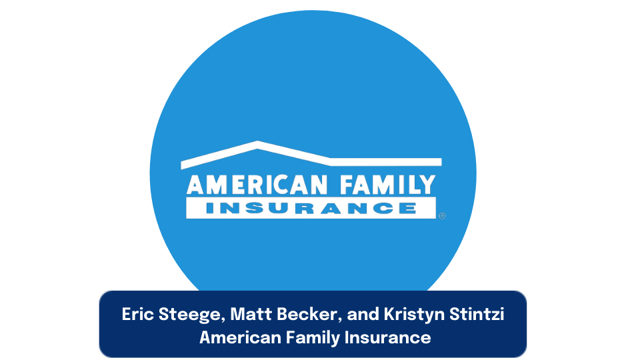 Eric Steege, Director of Lean Innovation, Matt Becker, Director of Organization and Change Effectiveness, and Kristyn Stintzi, Innovation Coach at American Family Insurance, share how they’re transforming the company’s culture to adapt to the future of work and recruit the talent they need to stay competitive in the digital age.

Nearing its centennial year in business, American Family Insurance, or AmFam for short, is a mutual company focusing on property, casualty, and auto insurance. AmFam has over $9.5 billion in revenue and more than 11,000 employees, so making institutional changes is no easy feat. In anticipation of changes to the nature of work and a desire to create an innovative culture, the company has turned to Eric Steege, Director of Lean Innovation in American Family’s Ignite Division, Matt Becker, Director of Organization Director of Organization and Change Effectiveness at AmFam, and Kristyn Stintzi, an internal Innovation Coach.

Culture can seem overwhelming to change but Eric and his team at AmFam reframe cultural transformation as changing daily behaviors. They are using product management tactics to help employees build new skills and action those in the way they work every day. Core to this strategy is mapping current state behaviors, setting behavior change outcome goals, and experimenting and tracking progress towards those outcomes.

The future of work is a catchphrase that captures competing visions of how AI, automation, and other technologies will become more embedded in business processes and change how people do their jobs. Matt says that the future of work anticipates a changing nature of jobs as work becomes more cross-functional and increasingly across different time zones.

Eric, Matt, and Kristyn’s goals are threefold. Their first goal is to recruit the engineering and creative talent that the company needs to remain innovative in the digital age. Second, because people will be increasingly distributed across time zones, the trio is developing tools and processes for asynchronous collaboration. Lastly, they’re creating a culture of innovation that includes increased digital literacy and skill building.

Matt recognized that human resources should apply lean innovation approaches to developing the program, so they partnered with Eric and Kristyn’s Ignite team, an innovation group that helps teams across AmFam become more agile and customer-centric. Kristyn coaches Matt's teams on collaboration and experimentation. “A coach is someone who is skilled at innovation methods, but also skilled at building high performing teams and developing people. We use our expertise in those areas to grow skills, mindsets, and behaviors in the people we work with,” Kristyn says.

As part of the cultural transformation, Matt’s human resources teams are increasingly working in small, collaborative teams. However, it can be difficult for teams to make this change. Kristyn has identified two key skills can improve the team dynamic: empathy and experimentation. Kristyn advises team to apply the same deep empathy that they practice with their users on each other. Likewise, experimentation should not be limited to product development. Testing different frameworks or work set ups for a short period of time takes pressure off teams to come up with the perfect solution from the outset.

According to Matt, the most successful teams know how to balance resilience and realism. He points to a project dedicated to enhancing the reducing recruiting timelines. Matt and his teams were able to do so by over 30%, which was a huge confidence booster. However, he acknowledges that there were also times where they spent time developing something that simply couldn’t scale. You need to be comfortable with both outcomes, Matt says.

While it’s one thing to create a new culture on a team level, it’s another task to get executive buy in to do so across an organization. Eric says that experimentation can help get key stakeholders on board. He describes an internal experiment with metered funding, whereby teams don’t get a lump sum of budget before beginning a project. Instead, AmFam determines funding after meeting specific benchmarks in the product ideation and discovery processes.

The future of work will bring many significant changes to the workplace, but by anticipating them, Eric, Matt, and Kristyn are is making sure that AmFam will continue to be a valued and trusted partner for its customers.

You’ll learn a lot from this episode about the future of work, company culture, and making change at a large organization.

Zoe Dowling, Senior Vice President of Research at FocusVision, shares how to get actionable...

Getting Acquired is Product Management

Diversity of Thought is Product Management