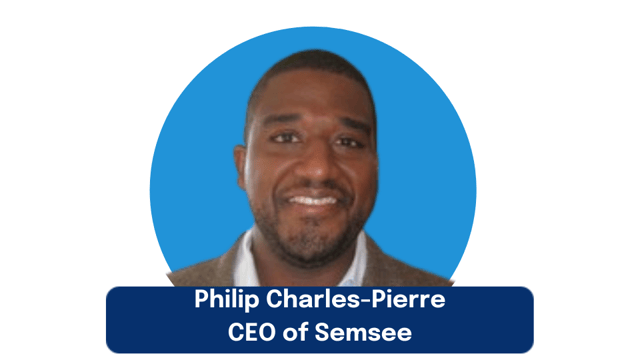 Philip Charles-Pierre, CEO of Semsee, shares strategies for growing B2B2C companies, and how to build products for both business customers and consumer end-users.

B2B2C is a business model where a company sells its product to a business customer who then distributes or sells it to consumer end-users. It can be a highly profitable strategy, but there are also a number of significant challenges that B2B2C companies need to overcome.

This week’s guest, Philip Charles-Pierre, has over 20 years of B2B2C experience, so he has a wealth of knowledge to share about this model. Philip is the CEO of Semsee (formerly MRLN), a startup incubated by two large reinsurance hedge funds. The company is building an innovative product for agents and brokers in the commercial insurance market.

Generally speaking, Philip says there are two categories of B2B2C business models: You can build a custom product for a single business customer, or provide a product offering that your business customers can then white label.

Philip discusses the pros and cons of each model:

One of the things that's fascinating to me about thinking of it as a subscription model or building it off of a platform is it allows you, the provider, and then your customer, and then ultimately their end customer, to get a product much faster to market. So if you're going with a custom route, that's usually months of development, months of ideation, and then months of actually putting the product out there, and then a year later, all of a sudden, you've got a product in the market. Versus the first way, the way that I've had the most experience in, is you're able to put out a product in hours, if not weeks at the worst-case scenario. Now, you sacrifice a little bit in terms of being able to fully customize it. But you're much quicker to market, and you're able to really take advantage of that kind of timing."

Prior to Semsee, Philip launched B2B2C offerings at companies that formerly only had a B2C offering. To do so, he utilized distribution partnerships and white labeling packages. Philip shares how he did this at Travelocity:

I helped run what's called the Travelocity Partner Network, which is the way in which Travelocity essentially co-branded private-labeled or had an affiliate program to distribute all of our products and the products beyond Travelocity.com. So we had about 1,800 partners from the likes of American Express, to AARP, to some of the airlines themselves, to a lot of small niche players and sites via our affiliate program."

Philip says the most common ways to price B2B2C engagements are time and materials, subscription, and revenue share.

If you're running more of a custom shop in some ways, then people pay you for your time and your materials, and they may pay you a monthly maintenance so in order for you to keep it up, right? And that gets very expensive, I think, for both the purchaser as well as you if that's the kind of shop that you want to run because every customer is different. You're not building something to sort of scale it by itself.  What I'm more accustomed to frankly is building a platform where the core of the product is run by a small team who are really expert at the product in and of itself, and then there's a team who manages the platform that distributes that technology or that product to our various distribution partners. And in that scenario whether it's what we're building at Semsee it's a SaaS subscription model where they are paying us a sort of a small monthly fee or a fee in order to access the product and the content and for us to maintain it. The beauty of that is, obviously, it's a recurring revenue stream for us, but for them, they don't have to worry as much about upkeep and fitting a schedule for us or things of that nature."

Tiama Hanson-Drury is the chief product officer at Minna Technologies.